EDUCATION OF THE GIRL CHILD AND NIGERIA 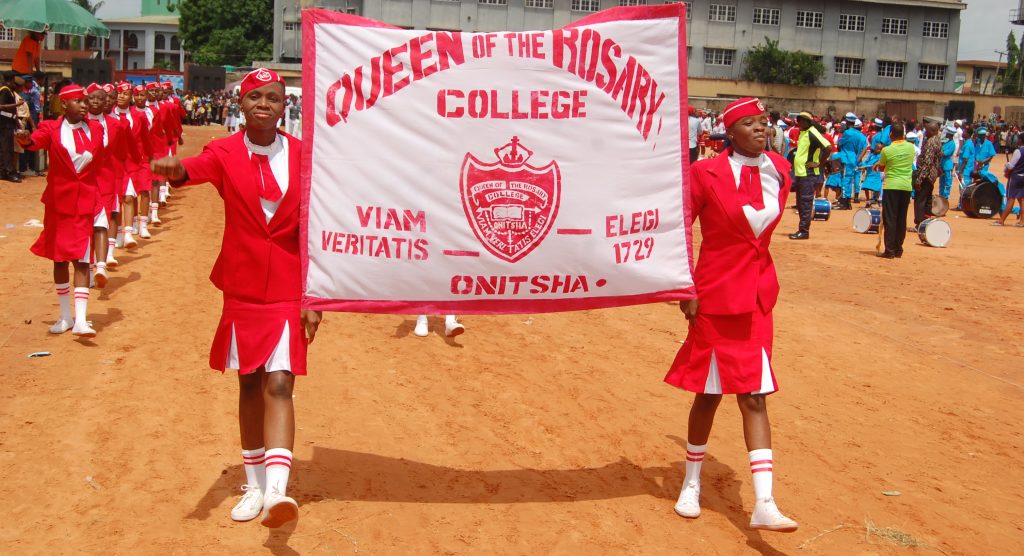 it’s pretty difficult to arrive at a unit position on whether Nigeria believes in and supports the education and other training e.g business training of the girl child ( female child ).

● the view-point of the 4 numerically major tribes in Nigeria [ viz : Igbo ( Ibo ), Yoruba, Hausa, Fulani ] on the issue since looking at the individual stances 250-plus different tribes may prove to be a rather tedious exercise.

● the view-point of the 36 state governments in Nigeria and the Abuja – Federal Capital Territory on the issue .. or at least their public? advocacy in this regards .. as reflected perhaps in and by the published commentary of the State Ministries of Education, State Commissioners for Education, etc in the print media and electronic media ( i.e in newspapers, magazines, television, radio, etc ) and also these days on the internet

● the view-point of the Federal Government of Nigeria on the issue .. or at least it’s public? advocacy in this regards .. as reflected perhaps in and by the published commentary of the Federal Minister(s) of Education, Federal Ministry of Education, etc in the print media and electronic media ( i.e in newspapers, magazines, television, radio, etc ) and also these days on the internet

● the view-point of the major religions in Nigeria ( i.e Christainity, Islam, Native Negroland Traditional Worship ) on the issue

and see if one can arrive at some sort of majority consensus position that takes into consideration all the differing views and perceptions.

it clearly becomes somewhat more difficult to arrive at a unit position that can be taken to reflect Nigeria’s wholistic principle and policy on this issue.

i suppose that an approach that i can adopt for now pertaining to this issue is to look at if from the angle of the view-point of the tribe of Nigeria that i am genealogically linked to by identifiable paternity and maternity on the issue as Nigeria seems to run a mix of patrilineal and matrilineal genealogical lineages.

█ according to oral history when the Europe Christian missionaries brought Aryan-type education to Igbo-land Nigeria ( Ibo-land Nigeria ) and Igbo ( Ibo ) language speaking parts of Nigeria, the Igbo ( Ibo ) speaking peoples of Nigeria were by and large rather very wary of it and for the most part sent only persons who they felt were “acceptable-losses”? and from such families to acquire this new thing from the conquering and land-grabbing Caucasian.

█ over time, the value of this Caucasian-type education became self-manifest as it’s products took and held positions of influence and authority in regards to the native populations in the administrative and other structures put in place by the ruling Aryans / Europeans.

█ this led to a cumulative acceptance of Aryan-type education and the seeking for it’s acquisition as a veritable means to participate effectively in the emerging new civilized? and educated life-style

█ being that the Igbo ( Ibo ) tribe for the most part advocates patrilineal i.e father-side genealogy and is therefore, more or less, a patrilineal-style society, the Igbo ( Ibos ) initially usually sent both their male and female off-spring to primary and secondary school and then at the university / polytechnic stage i.e the tertiary-level of education stage, sent off their daughters into marriages and married life while sending their sons to further their education to tertiary-level.

█ the Nigeria Civil War i.e Biafra War ( 1967-1970 ) had a horrendous effect of both male and female igbo ( ibo ) populations and was particularly horrendous on the male populations as up till today 2020 there are horrendous rumours of instances and places where Nigeria selectively killed off only the males in Igbo speaking cities, towns,and villages e.g Asaba. ( you can google the Asaba incident )

add to this the difficulty the now-defeated-in-war Igbo ( Ibo ) males were rumoured to have suffered while seeking jobs in the “not-Biafra-areas”? of Nigeria after and from the end of the war in 1970 and you can see the reason for the emergence of the wisdom in Igbo ( Ibo ) language speaking areas that all female children should be educated to the highest possible levels at the University and Polytechnic (  i.e at the tertiary-stage of education ) while the males should be sent off early in life to learn a trade / business with which they can hopefully earn some income to put food on the table outside of employment by state governments, companies and the federal government.

●● the cumulative position i.e the net position of the Igbo ( Ibo ) tribe and Igbo ( Ibo ) language speaking peoples of Nigeria today 2020 seems, un-equivocally, to be that

● where the family can, one way or the other, put together the necessary resources required to train both their male and female off-spring to the highest level possible ( i.e the University / Polytechnic / Tertiary level ), the family does so.

● where the family can not, one way or the other, put together the necessary resources required to train both their male and female off-spring to the highest level possible ( i.e the University / Polytechnic / Tertiary level ), the family selectively sends the Igbo ( Ibo ) girl-child to the University and to the Polytechnic
whereas
the Igbo ( Ibo ) male-child now? an “en-dangered?”species since? the unfolding? of events? that led? to the Nigeria Civil War i.e Biafra War ( 1967-1970 ) and also now? a species that has witnessed? “extinction?-threats” and “cleansing?/wiping-out?-threats” to it’s existence? ( ref : the rumoured  Asaba incident for example ) in the interest of their own continued survival are sent off early in life to learn a business or trade.

One thought on “EDUCATION OF THE GIRL CHILD AND NIGERIA”